Set to celebrate its 40th anniversary in November 2022, Microsoft Flight Simulator is one of the longest-running video game series of all time. In these 4 decades, it has gone from black-and-white wireframe graphics on 6 by 6 tiles to the cloud-powered ultra-immersive graphical marvel that it is today. In this article, we take a trip down memory lane and look at Microsoft Flight Simulator through the lens of history.

Before it was Microsoft Flight Simulator, the AAA series was F1 Flight Simulator developed and published by Sublogic for Apple II and, later, the TRS-80. The idea to build a flight simulator gained traction after the publication of a set of articles on flight simulation using 3-D graphics in 1976. These articles were authored by Bruce Artwick, who later partnered with Stu Moment to create Sublogic: the company that would ultimately develop the FS1 flight simulator.

The FS1 ran on machines with 16 KiB of memory and was ‘capable of drawing 150 lines per second. It took only 3-5 inputs a second and simulated a slightly modernized version of the British WW1 biplane fighter aircraft, the Sopwith Camel. The display was basic at best and would undergo further adjustments in order to successfully port the game to the much more limited TRS-80. In this regard, the instrument panel was slashed and the resolution of the cockpit window display was reduced significantly.

The game simulated a Cessna 182, and allowed users to fly in one of the four US regions of Chicago, New York, Seattle, and Los Angles. The game featured improved and colored graphics, variable weather, and the time of the day. Perhaps, the most entertaining feature of the new game was the ‘Europe 1917’ mode based on FS1 Flight Simulator’s ‘British mode’. The mode enabled users to fly a Sopwith Camel war plane into a grid-divided region surrounded by mountains. There they could attack enemy planes and declare war.

Microsoft marketed the program aggressively with the ads going as far as, ‘If flying your IBM PC got any more realistic, you’d need a license’. Sounds rather comical today, but back then it was the real deal. The game sold over 800,000 in its first 5 years and was raved by the critics. Electronic Fun with Computers & Games’ Hartley G. Lesser wrote, “Microsoft’s Flight Simulator actually turns your IBM PC into a Cessna. The thrill of flying becomes a reality.”

Only 2 years later, Microsoft came up with Flight Simulator 2.0 featuring minor graphical and accuracy improvements. The scenery was expanded to cover the entire US although the airports remained unchanged. Inarguably, the biggest improvement was the ability to use a joystick or mouse for controlling the aircraft.

The Rise and Rise of Microsoft Flight Simulator

The following year, Microsoft launched Flight Simulator 4.0. Amongst other features, the game featured improved aircraft models, dynamic scenery, random weather patterns, and the ability to adjust flight characteristics and create experimental aircraft. Remarkably, though, the packing remained unchanged, with Microsoft swapping out 3.0’s scenery with another. Well, that’s what happens when you dole out versions year in, year out.

Microsoft seemed to have learned its lessons because Flight Simulator 5.0 wasn’t released until 4 years later. The much-anticipated version of the game ramped up realism by introducing textures, sound effects, artificial intelligence, and custom cockpits. This resulted in better graphics, more accurate flight models, and a more immersive experience overall.

Two years later, in 1995, Flight Simulator 5.1 became the first game in the series to be released on CD-ROM. It was also the first version to feature satellite imagery and improved upon its predecessor with better weather effects and faster performance. The same year, Microsoft ported a similar, albeit faster, version to its newly launched operating system, Windows 95.

Leveraging the power of GPUs

Flight Simulator 98 was the first game in the series to take advantage of 3-D graphic cards via DirectX. The 3-D environment brought about improved performance, better-modeled airplanes, and distinct sounds for each type of aircraft. It also featured a helicopter, the Bell 206B III JetRanger, and an expanded in-box scenery with 45 detailed cities and as many as 3000 airports. The flight sim was a huge success and shipped over a million copies within 2 months of its release.

Two years later, Microsoft came up with the Flight Simulator 2000 featuring major upgrades. For starters, it had better visual fidelity, improving upon the detailing of its predecessor. In this regard, rain and snow were incorporated for the first time. The game also introduced new aircraft and airports. Boeing 777 and Supersonic Concorde were added alongside 17,000 new airports. With such exciting additions, it’s not far off to think the game would have garnered a positive response. Well, not exactly! While the graphics were praised, most people were disappointed that the game demanded high-end hardware. You needed a Pentium 166 MHz to run the game and a 400-500 MHz computer for bearable framerates. What didn’t help was that even with high-end hardware, the game stuttered in graphically dense areas.

The next major release in the game series was Flight Simulator 2002 which was released shortly after the 9/11 attacks. As expected, the game outperformed all previous versions. It marked a significant improvement in graphics and was much smoother than its predecessor. The sim also incorporated Air Traffic control and artificially-intelligent aircraft to fly alongside the computer-controlled planes. The game garnered appraise from critics and the public alike, winning PC Gamer US’s ‘Best Simulation’ and the Academy of Interactive Arts & Sciences’ 'Computer Simulation Game of the Year’ awards.

Two years later, Microsoft doled out Flight Simulator 2004: A Century of Flight to commemorate the hundred years of the Wright brothers’ first flight. The sim featured several historic aircraft like the Wright Flyer, Ford Tri-Motor, and the Douglas DC-3. Amongst others, the most noticeable inclusions were a revamped weather system with localized weather and detailed air traffic control.

The next iteration in Microsoft’s Flight Simulator series was the Flight Simulator X. It was launched in 2006 in two editions: Standard and Deluxe. While the standard edition featured 18 aircraft, 28 detailed cities, and 24,000 airports, the Deluxe edition was shipped with an additional 6 planes and 10 cities. With higher resolution textures, the game visually outshone all previous versions, although the frame rate was at times sore.

The game received generally favorable reviews from critics and users. The enhanced multi-player support was particularly praised and quite fittingly. The game allowed users to be air traffic controllers as well as co-pilots.

In 2009, Microsoft shut down Aces Game Studio, the department responsible for developing the game. The game, however, still found its way to Steam in 2014 when Microsoft granted Dovetail Games the rights to port the game to Steam. Other than that, there were no major developments during this period.

Return and the Best-looking Game Ever?

After an agonizing 13-year wait, Microsoft finally announced the latest iteration of its flight simulator series in 2019. The game hit the market in 2020 and took the world by storm. Featuring ultra-realistic scenery, real-time weather and traffic conditions, and sophisticated flight models, Microsoft Flight Simulator 2020 has been frequently described as the best-looking and most immersive game ever. Holding a 90% approval rating on Metacritic at the time of writing, the AAA title is also the highest-rated flight sim of all time.

Microsoft Flight Simulator is the first flight sim to offer both VR and console support. It went VR-compatible in December 2020 at the culmination of an initial beta-testing phase. In July of the next year, the AAA title was successfully ported to Xbox X/S consoles. The game eluded Xbox One for another 9 months before it was made available via Xbox’s Cloud Gaming Service.

From black-and-white wireframe graphics to bewitching scenery, Microsoft Flight Simulator has come a long way. It has sold over 21 million copies, contributed billions in hardware sales, and made our days bearable. As we inch closer to its 40th anniversary, here’s hoping for another 40! 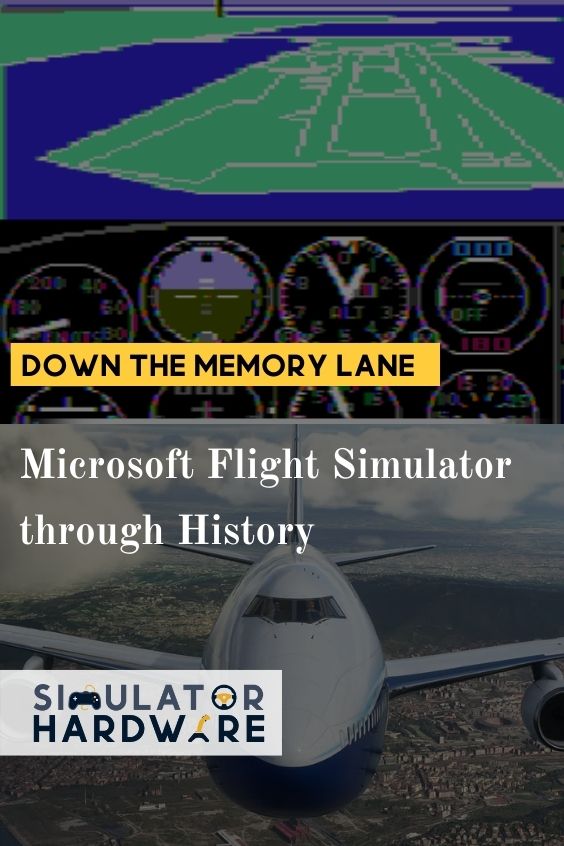