Microsoft Flight Simulator 2020 has been smashing all sales records for its genre since it came out. Its acclaim is absolutely well deserved too. There is simply no other title that does it like MSFS 2020 with its unmatched realism, incredible visuals and genuinely entertaining gameplay. But gamers and flight sim enthusiasts are always looking for ways to level up their immersion. One surefire way to make your purchase go the extra mile is through the use of add-ons or mods. These can range from graphical changes, to new gameplay elements all the way to adding new assets (like new planes) into the game. 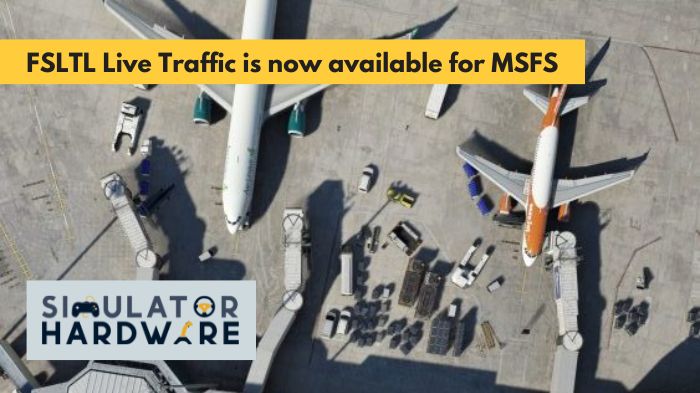 Microsoft Flight Sim has a thriving mod community, aided of course by how popular the franchise has become. They are always looking to improve your experience with things a lot of people would like that the developers at Microsoft couldn’t manage to integrate into the final product. Flight Simulator Live Traffic Liveries, or FSLTL just came out and it promises to be a worthwhile addition to the already impressive and expansive set of overhauls for Flight Simulator.

FSLTL is a live traffic injection system add on for Microsoft Flight Simulator 2020. It’s a visual, gameplay and quality of life modification for MSFS 2020 that seeks primarily to boost how immersive the game feels. But what does “live traffic” mean, you say? The add-on can use real-world, real-time flight data to populate the skies in Flight Sim. Essentially, the planes that you will see around you will actually be airborne in real life at that time.

It’s crazier than it sounds, because FSLTL doubles down on this feature with an impressive visual introduction. FSLTL boasts nearly a thousand liveries bearing the colors, flags and branding of the biggest international and regional airlines. Expect to see the giants of the aviation world like Qatar Airways, American Airlines, Delta, Air France and on top of that you also get jets from the logistics world like from FedEx and CLA. Airports should get more crowded as well, making the game feel more lifelike than it already is. All the liveries are built from the ground up in full 4K with PBR texture effects. If you want to enjoy these textures in all their glory, why not get a monitor that can really make your game pop? Our 5 Best Monitors for Microsoft Flight Simulator 2020 in 2022 serves a wide range of needs and wants but bottom line, they’re all good!

FSLTL have gone the extra mile with the incorporation of custom effects and sounds as well. Aside from how the plane interacts with the ground services and jetways, the former brings true to life effects in take-off and landing, with lighting, contrails and heat haze too. The latter brings authentic sounds typical of the custom aircraft including start-up, shutdown and spool-up sounds as well as sounds the plane would make when its idle.

FSLTL vs AIG – We got Competition!

AIG Traffic Model Matching is also a live traffic injection system and it’s been available for considerably longer than FSLTL. Here’s what we learned about the two in contrast to each other;

Some Things to Note before Installing FSLTL

Apparently FSLTL are pretty open to the inclusion of open-source models that would do a lot more for how customizable the mod would become, but as it stands what you see is what you get.

Installing FSLTL on your PC

You first need to run the FBW installer, and the radar icon should lead you to a menu that presents FSLTL Traffic Base Models and FSLTL Traffic Injector. To install either of these, just click and hit install on the bottom right of the FBW Installer window after checking whether you have enough space or not. It’s that simple! You’ll find all the right links here on their official website.

Should You be Excited for FSLTL on MSFS 2020?

A lot of people like to keep their games as they are. And we totally respect that. However, if you’re a little tech savvy, like a little customization and really want to get the most out of your purchase, add-ons are the way to go. Personally, we love seeing artifacts from the real world make their way into the game and we’re really fascinated how traffic injectors can add an element of realism unlike any other add-ons do. If this sounds appealing to you, the world of add-ons is yours to explore! If not, we think the game already has enough to keep you entertained. Either way, we hope you’re enjoying flying around in MSFS 2020 whether it’s modded or not.