On Tuesday, September the 20th, NVIDIA announced the latest in greatest in their line of GPUs with the RTX 40 series Graphics Cards. They promise tremendous upgrades in performance and various enhancements to newer tech in ray tracing, for example. According to some of their claims, the 4090 should be twice as fast without ray tracing and up to FOUR TIMES as fast when ray tracing and DLSS 3 is enabled. 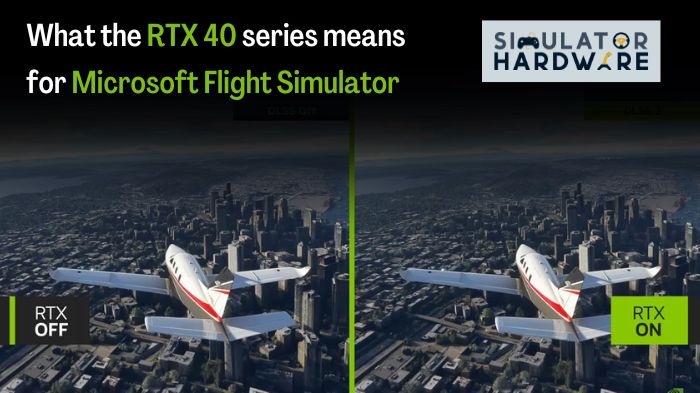 Some will argue that the 4090 is quite overpowered in the context of the games out today. No title released this year will really test its limits. And this is after you consider how powerful the 3090 is in its own right. Like the top line of our best PCs for Flight Simulator 2020 can get you a pretty solid experience already. Also, we’ve only JUST started to get our hands on 3090s because of how much of a mess the market was a while back. We don’t want to sound like we’re complaining though. Not only will we take as much horsepower as we can get, but the 4090 should slot comfortably in our best graphics cards for Flight Simulator 2020 list.

NVIDIA so far have announced the RTX 4090 and two variants of the RTX 4080. Their specifications are listed as follows.

DLSS technology uses AI and Tensor Cores on RTX GPUs to render your games at a lower native resolution and later upscale them to your display’s resolution. What this does is essentially give you the FPS count of lower resolutions while practically looking at higher quality images. DLSS 3 is an upgraded version of their DLSS 2.0 technology coming exclusively to the RTX 40 series GPUs.

Essentially, once RTX and DLSS 3 are enabled, you can expect to effectively DOUBLE your FPS count. This is on top of the gorgeous lighting effects RTX brings through Ray Tracing. If you missed it, MSFS 2020 only just announced full support for DLSS with an update coming out September the 21st. This is probably the best new update to the game since they added the Pelican from Halo. We’re excited to see what improvements are in store for us with DLSS 2.0 and the RTX 30 series GPUs first, so that we can be even more excited for the wonders of the 40 series lineup.