MSFS 2020 40th Anniversary Edition will be a free update with historical and latest aircraft for Xbox Game Pass members and simmers who are already flying through the virtual world (means those who are already having the game). 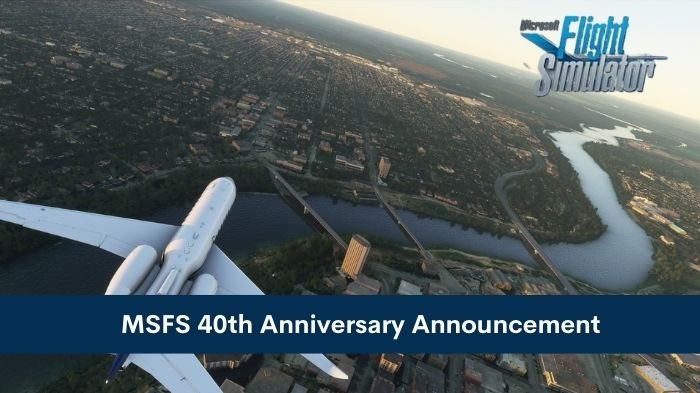 As you know, this year marks the 40th anniversary of the franchise, and they thought the best way to celebrate this landmark year was by bringing together all previous editions and the latest updates in one place.

It means that all fan favorites like iconic Cessna aircraft are still there but so are new and exciting ones, including helicopters and gliders!

In November 2022, the developers of Microsoft Flight Simulator are going to be releasing a special “40th Anniversary edition” of MSFS that you can watch in the official trailer! This free version will include several exclusive features designed to tie into the release.

More so, MiViz has become the latest developer to showcase its aircraft in action alongside other creations and historically interesting airplanes, such as the Wright Flyer, Spirit of Saint Luis, and more.

According to the official source, here is just a small sampling of what simmers will find in the Microsoft Flight Simulator 40th Anniversary Edition, Virtual Pilots would be introduced with some great additions with the 40th Anniversary Edition. We have seen some historical aircraft like the Wright Flyer Ryan NYP (“Spirit of St. Louis”), Douglas DC-3, and De Havilland Canada DHC-2-Beaver roaring through the sky.

Surprisingly, some new helipads can be seen in the official trailer released on Jun 12, 2022. To fill the helipads, you will be able to fly choppers like the Bell-407Guimbal and Cabri G2.

Another thing I noticed in the news was that the franchise is now going to introduce some gliders including DG Flugzeugbau LG8-18, and DG Flugzeugbau DG1001E neo, which were only made possible due to third party sources previously.

What is going to be really cool to see here is how these new supplements for MSFS compare to other third-party solutions that have achieved the same goal of offering a helicopter and gliding flight dynamic for MSFS in recent years.

It includes FlyInside Bell 47 or Got Friends Discus-2c.

Later on, Microsoft Flight Simulator signed a partnership term with the Smithsonian National Air & Space Museum to bring one of aviation’s most famous flying machines (Spirit of St. Louis) to life in the simulator as part of its 40th Anniversary Edition.

Last but not least, in collaboration with 343 Industries, Microsoft Flight Simulator (MFS) presents the most detailed and precise Halo Infinite Pelican add-on available on the market today.

Surprisingly, before the final release of Halo Infinite Pelican add on, MFS offers Halo fans worldwide an exclusive chance to experience a glimpse of what’s to come in the newest updates of one of Microsoft’s flagship game franchises.

With the latest Anniversary update by MSFS, we can clearly say that ‘MSFS is not going to be a thing of the past’ just like some other games.

Also, we would like to see a diverse range of helicopters and gliders, but the good thing at least they are introducing something new. It’ll surely expand to some true-to-life simulations which simmers will love to fly on and move around the world.