The G Pro Flight Rudder Pedals come from the house of Logitech-an industry-leading manufacturer of gaming peripherals. Logitech is famous for its high-quality affordable offerings and the set of rudder pedals has only enhanced that reputation. It frequently features in the lists of the best rudder pedals for flight simulators and is widely regarded as the best option for the same. In the following review, we put this reputation to the test.

Verdict: Perfectly imperfect, Logitech’s set of G Pro Flight Rudders leaves you wondering how good a peripheral it could be if only it had a slightly better build and a fairer price. Logitech’s G Pro Flight Rudder pedals measure 17.8 x 14.4 x 9.1 inches and weigh 5.07 lbs. For an authentic flight experience, the set of rudder pedals features a self-centering mechanism and differential braking system. While the former’s name gives it away, the latter deserves some further explanation. Differential braking enables users to control the left and right toe breaks independently, hence giving them greater control over the aircraft’s motion. Other notable features of the G Pro Flight Rudder Pedals include, but are not limited to: Our editorial team tested Logitech’s rudder pedals over 30+ hours spread across 2 weeks. The flight sim software we used was mostly Microsoft Flight Simulator 2020, although, we did occasionally shift to X-Plane 11. Our review of the product with respect to design, build quality, functionality, customizability, compatibility, comfort, and convenience is featured below.

The Logitech G Pro Rudder Pedals support a rather slick design with matte black pedals and a greyish-silver central knob. The build quality, however, doesn’t hold up its end of the bargain. Cast almost entirely out of plastic, the set of rudder pedals feels cheap and toyish. Sure, it is durable and can sustain a few bumps here and there but it is no match for slightly costlier models like the T-Rudders Mk. IV. That being said, the pedals aren’t flimsy and should be good enough for a couple of years of use. Overall, 3/5 for the Design and Build quality.

The most noticeable aspect of Logitech’s G Pro Flight rudder pedals is the adjustable spring tension. You can fly against as little or as much resistance as you want. As essential as the feature sounds on paper, it is quite rare, with even a few top-of-the-line products not supporting it. Neither Thrustmaster TFRP nor CH Products Pro Pedals offer any mechanism for adjusting tension. So in that regard, Logitech’s offering definitely stands out. It is worth mentioning, however, that adjusting tension doesn’t seem to have much of an impact. Sure, it smoothens out minor rudder adjustments but that’s just about it. That being said, I would have Logitech’s adjustable tension over Thrustmaster’s fixed tension any day of the week!

Among other features, Logitech’s rudders offer differential braking and a self-centering mechanism. While the former allows greater control over the plane, the latter centers the pedals when no force is being applied. Although I find both these features very desirable, it is pertinent to mention that the self-centering mechanism ensures you are always pushing against some tension. It’s not necessarily a bad thing but it tends to divide opinions. 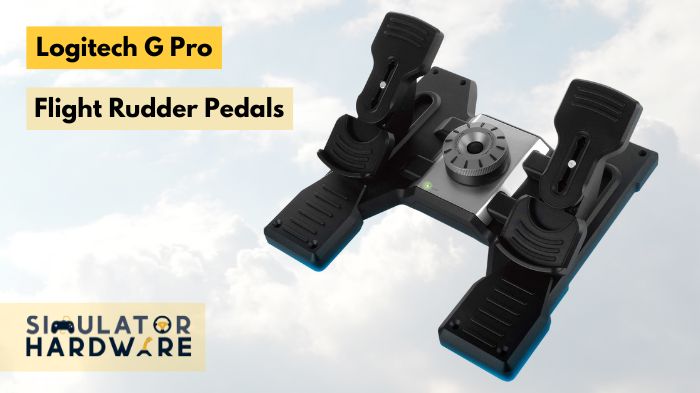 The sliders of Logitech G Pro Flight Rudders seem to have a travel distance of 2.5 – 3 inches. That’s a decent figure, especially when compared to similar products in the market. Thrustmaster TFRP Rudders, for example, have a slider distance of only 2 inches, making them much less realistic than the G Pro Flight Rudders. Talking of realism, the pedal’s contra motion definitely helps Logitech’s cause. When pressed, the pedals move in opposite directions, helping simulate the feel of a real aircraft.

All is not well for Logitech’s offering, however, as the set of rudder pedals has its fair share of shortcomings. For starters, it has a dead spot around the center: nothing too major but definitely noticeable. Secondly, the range on the brakes is underwhelming. Logitech’s rudders have less brake range than Thrustmaster TFRP pedals which are roughly 40 dollars cheaper.

All in all, I would give Logitech G Pro Flight Rudder Pedals a solid 4/5 for functionality.

It is customizability where Logitech G Pro Flight Rudders truly stand out. We have already talked of the adjustable tension but that’s just the tip of the iceberg. The pedals have modifiable length, offering 3 screw slots to support a host of foot sizes. All you need to do is loosen the screw in the pedal and move the front half forward or backward until you are satisfied with the pedal’s length. Unless you have abnormally small or big feet, you should have no trouble using the G Pro Flight Rudders. I am a size 12 myself and had no problems whatsoever. Indeed, I found the toe brakes more comfortable after adjusting the pedal length.

While the pedals work right out of the box for most flight sim software, you can download ‘Logitech’s Saitek Smart Technology configurator’ for greater control over layout, axes, and sensitivity. You can even configure them for use in racing sims.

As mentioned already, the pedals offer plug-and-play functionality with most flight sims- Microsoft Flight Simulator 2020, X-Plane, DCS World, and P3D being a few of the notable names. They are compatible with an array of operating systems including Windows (starting with Windows XP all the way up to Windows 10) and macOS (although you would need appropriate MAC drivers). You can also use them with your Xbox and soar the skies with Microsoft Flight Simulator 2020.

Logitech’s G Pro Flight Rudder pedals are ribbed at the top and feature a small lip at the bottom, ensuring a non-slip and stable design where your heel won’t fall off while performing quick flight maneuvers. With comfort ensured, you can go about your business for hours on end.

While they are comfortable for use, setting them up is a real hassle. The floor mounting system is downright terrible and the pedals slip, especially on smoother floors. Sure, they come with Velcro strips but those are ineffective on the carpet and who uses them on bare floors? One solution to the problem is to put weight behind the pedals, somewhere in the range of 20 - 30 lbs. That’s exactly what we did, and it worked well. A more permanent and better solution would be to bolt the pedals to the desk.

All in all, I would give Logitech G Pro Flight Rudders a 3/5 for comfort and convenience.

Throughout the preceding review, we have rated individual aspects of Logitech’s Flight Rudders on a scale of one to five, A summary of the results is tabulated below. The overall rating has been computed by taking the average of all ratings.

Logitech’s set of G Pro Flight Rudders has its shortcomings. It doesn’t have the best build quality or the most accurate braking system. Mounting options are downright terrible and the price is a bit too steep. Yet, it is one of the best options we have, especially for an entry-level simmer. So, if you get it for anything close to the MSRP, go for it!